A proud department of Six Nations of the Grand River Development Corporation, Six Nations Tourism is here to provide you with information on Six Nations and the vibrant Haudenosaunee community that comes with it. Nestled along the Grand River in the heart of Southern Ontario’s Golden Horseshoe, Six Nations is a place to have fun, play hard, and discover the uniquely rich culture.

For travel information, and/or assistance in planning your trip to Six Nations of the Grand River, please visit: www.sixnationstourism.ca

Six Nations of the Grand River Development Corporation(SNGRDC) manages the Six Nations’ economic interests in 14 renewable energy projects and numerous economic development opportunities in and around the Six Nations territory. SNGRDC’s current green energy portfolio is capable of producing nearly 900MW of renewable energy through its direct or indirect involvement in seven solar, six wind, and one hydroelectric project(s). SNGRDC is located on the Six Nations Reserve and directly employs over 100 employees through Nation Enterprise of the administration of Economic Interest projects. 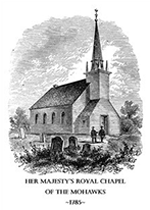 The Mohawk Chapel has touched the lives of countless individuals, from people of Six Nations, to Queens and Princes, residential school children and worshippers from the Brantford area. Thousands of people have come from around the world to admire this chapel which has stood 83 years prior to the formation of Canada. In the past it connected us not only to the Church but to the British Crown, where our people enjoyed the position of trusted ally, a position to which we hold to this day.  In the future, I hope to see the Chapel evolve into a site which represents reconciliation, not only for Residential School issues, but reconciliation of issues of social justice, land, and education.

Her Majesty’s Royal Chaplain. The term chaplain refers to a cleric that serves in a secular institution such as a school or hospital or in a private chapel.

Her Majesty’s Royal Chapel is part of the Queen’s royal ecclesiastical house to serve the spiritual needs of her majesty. In the case of the Royal Chapel of the Mohawks, the Chaplain serves at her majesty’s behest, the great Mohawk people who supported England in the Revolution.  The impact of this alliance is important to the earliest periods of Canadian history.  The Chaplain is chosen by the people and the Bishop of the Anglican Diocese of Huron.

Today the Chaplain’s role in the community is to welcome and conduct Anglican services.  However, in the age of truth and reconciliation, the Chaplain has a responsibility to build bridges with the communities and to play a role in these efforts.  The Reverend Rosalyn Elm who is Oneida and part of the same Haudenosaunee Confederacy as the Mohawk has a special role to play in ensuring that Haudenosaunee ways of knowing and being are upheld, respected and as our cultural norms that reflect the institution of the Great Law of Peace and its cohabitation with the Gospel of Christ.  That both inform our way of life in peace, love and righteousness taught by the Peacemaker and lived by our leaders.

Iroquois People and the American Revolution

In 1771 many Mohawks had to leave their homes in the Mohawk Valley as Europeans began to encroach into their territory. A smallpox epidemic also swept through the area. The American Revolutionary War would only add to this dilemma. Therefore, in 1775, Joseph Brant travelled to England to meet King George III to plead the case of Rotinonson:ni as allies to the Crown. Brant wanted protection of their lands against encroachment but he could only get a promise to address such issues after the War.

After the War, the Mohawks who remained loyal to the British Crown were forced to leave their homeland and relocate to Upper Canada. Through agreements with Sir Frederick Haldimand, lands were reserved for the Native allies as compensation for their loss in the Mohawk Valley. Frederick Haldimand was the Governor of Canada from 1777 to 1786.

Joseph Brant known as Thayendanegea, was a diplomat and warrior who lead his followers across Lake Ontario. He was a member of the Wolf clan, born on the banks of the Ohio River in 1742. Joseph Brant was sent to the Indian Charity School in Connecticut while a teenaged young man. He became a Christian and translated the Bible into Mohawk. Between 1765-1771 Brant acted as an interpreter and engaged in political missions to the western nations.  In 1784 after the Haldimand Proclamation was issued Joseph Brant led a group of Six Nations people to what is now Brantford. In 1785 the Mohawk Chapel was built.

On October 25, 1784, the Haldimand Proclamation was issued which reserved land, six miles from both sides of the Grand River, from Lake Erie to the source of the River, for the Mohawks and “such others of the Six Nations Indians” who allied themselves with the English in the Revolutionary War and continued to seek the protection of the Crown. The reserved lands amounted to approximately 950,000 acres. Each Nation set up one or two of their own villages along the Grand River. From 1784 to 1785 about 1200 Rotinonson:ni made their way across the Niagara River to their new homes.

Queen Anne commissioned the building of Fort Hunter in 1711 which would house a chapel within. She also provided a silver communion service and bible for that chapel along with other furnishings. The Queen Anne silver bears the inscription “The Gift of Her Majesty Anne by the Grave of God of Great Britian, France and Ireland and her plantations on North America, Queen to her Indian Chapel of the Mohawks.” By 1781, the Chapel was plundered by American Revolutionary forces. Prior to that, the Communion service had been removed and buried by Mohawk warriors until after the war when it was retrieved and taken to Upper Canada to be divided between Six Nations and Tyendenaga Mohawk, who settled near Belleville, Ontario.

The first Mohawk Institute was started by the New England Company in about 1831 and was located across the road from the Chapel. In 1854, it was transferred to its present location. In 1903, it burned to the ground and was rebuilt in 1904. It was later taken over by the Federal Government of Canada in 1922. It closed as a residential school on June 30, 1970. Soon after, the facility was converted to the Woodland Cultural Centre, housing a library, native language department, museum, art gallery and art collection. The Chapel window called Residential School days shows a time when Indigenous languages and culture were challenged. Government run schools were built across Canada after 1922 were notable for imposing negative experiences. A greater understanding of the impact of the Canadian Residential School system has been documented in the Report of the Truth and Reconciliation Commission, issued in 2015.

In 1904, St. Paul’s became known as Her Majesty’s Chapel of the Mohawks. It was given its designation as a Royal Chapel, as a form of recognition for the long-standing alliance between the Rotinonson:ni people and the British, as borne out of the unheralded contributions that the Rotinonson:ni made to the history of Canada.

*All information above are from the book “St. Paul’s H.M Royal Chapel of the Mohawk” by W. Barry Hill. Click here to learn how you can purchase.

TIMELINE OF THE CHAPEL

Structural renovations to stabilize the perimeter walls and upgrade the foundation and basements areas.

Further renovation and upgrades were completed. The construction of a scenic lookout at the pathway where some of the original parishioners would arrive by canoe were completed just prior to Her Majesty Queen Elizabeth II visit.

Over $20,000 was raised to build a new foundation, install a new furnace, kitchenette, and washrooms. An up to date sprinkler system was installed and a direct hook up to the City of Brantford Fire Hall was completed.

A major renovation was undertaken; $10,000 was received from Thomas Foster and the siding inside the Chapel was installed.

The Chapel is designated a royal chapel by King Edward VII.

Records indicate a brick foundation and basement were install under the Chapel.

1834 – 1967
Burials on the chapel grounds include both Natives and non-natives people.

Mohawk Chapel was consecrated by Reverend C.J. Stuart who was the second Anglican Bishop of Quebec.

The Chapel was repaired and altered; the entrance was originally on the East facing the river and the pulpit was in the center of the South wall and faced the North. The spire was taken down and rebuilt on the West end, with the lower portion enlarged as to permit an entrance through the center. This was due to the river no longer being the primary way of travel.

Joseph Brant and his followers arrive and establish the Mohawk Village. The Mohawk Chapel was built this year.

Haldimand Deed-Sir Frederick Haldimand, the Governor of Upper Canada, issued the Haldimand Deed to the Six Nations people which was 950,000 acres. This included six miles on each side of the Grand River from the mouth to the source.

The Queen Anne Royal Chapel constructed at near the Mohawk River, within Fort Hunter New York. Queen Anne provided the Chapel with Silver Communion Service and a bible.

Five Nations travelled to England to meet with Queen Anne. Agreements were made.

Two row wampum of the Rotinonson:ni, the original Treaty with the Dutch, later transferred to the British.

Confederacy of the Five Nations formed. The Great Peace established.